The human body and its shape can reveal amazing things about a person. Several measures have been used to learn more about one’s health for centuries now. But what if I told you that the most widely accepted measurement is not reliable?

That’s right, BMI doesn’t take into consideration a number of important factors and therefore, isn’t a true reflection of obesity. Let’s see why BMI shouldn’t be used and why Shape Index can tell you a lot more about your health!

BMI, or Body Mass Index, is a measure that uses your weight and height to provide indications about your level of obesity. Based on this level, it makes direct assumptions about your health, the risk of various disease and death.

It’s a fairly straightforward calculation that simply divides your weight by your height^2. The equation speaks for itself, as it’s clearly seen that it doesn’t differentiate between muscle and fat.

Based on your BMI Index you can be categorized as underweight, normal, overweight or obese. According to WHO BMI Classification these 4 categories cover the following Body Mass Index ranges. 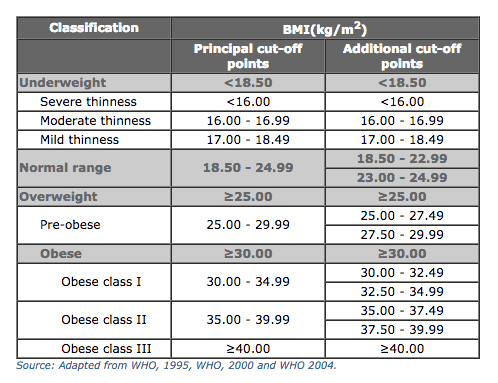 Why BMI Is Wrong

Let’s just think about it for a second. How would it even be possible to get a reliable indication of obesity purely based on one’s weight and height? Even without going into the scientific details, it doesn’t sound like a promising measure. But let’s see the science behind it. Here are the 4 main reasons why BMI’s validity is questioned.

1. It Doesn’t Differentiate Between Fat And Muscle

Body composition one-on-one: muscle is denser than fat. This simply means that if you put the same-size portion of muscle and fat next to each other, muscle is going to weigh more. For this reason, it is not logical to assume no difference between muscle and fat when predicting someone’s obesity level.

There are so many different body types that can be poorly categorized due to this problem.

Another example can be the same person. If someone goes through a body recomposition, their BMI can remain the same or even go up by replacing fat with muscle. However, as the picture clearly shows, their physique will completely change. 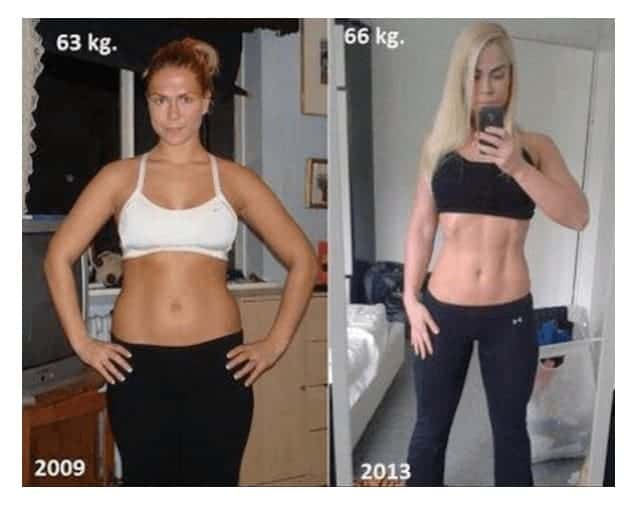 Therefore, deriving indications on your health from your BMI category without taking this factor into consideration is simply wrong.

BMI only calculates an overall estimate. It doesn’t take fat distribution into account, which is actually a crucial factor when it comes to health risks. Simply because not all fat is the same fat.

You have two different types of fat in your body. Most of it is filled with subcutaneous fat, which lies under your skin. This is the so-called “easy-to-grab” fat, which is not that dangerous for your health.

The other type, however, the so-called visceral fat is the one with the major negative effects on your health. Visceral fat is distributed around your belly area in deeper spaces than subcutaneous fat.

Abdominal fat was found to have several health risks by the Growth Hormone Research Society and the International IGF Research Society. These include cardiovascular disease, diabetes, insulin resistance and ultimately increased chances of mortality.

So yes BMI, even though you don’t take localized body fat into consideration, it does matter a lot!

Read our tips on losing belly fat more effectively than ever

There are two simple demographic factors that again are not taken into consideration by BMI: sex, and age. However, both of these have a clear influence on the body shape and the risk of mortality.

Not differentiating between men and women is almost as big of an issue as muscle and fat. The two genders have completely different body structures and physiques.

Men generally have denser and stronger bones than women and higher muscle mass. Furthermore, a study by Childhood Nutrition Research Centre and the Centre for Paediatric Epidemiology & Biostatistics, Institute of Child Health has found that different body parts reflect fatness for men and women.

The same study has also found that the weight distribution changes with ageing. What’s more, these changes are different across genders too. A 22-year-old guy will not have the same physique and body composition as an 80-year-old grandma, which is completely normal.

Due to these differences, BMI’s insensitivity to age and gender makes the measure even more insufficient.

4. It Assumes That We Are Two-dimensional

The way BMI makes its calculations is dividing your weight by your height^2. This equation correctly assumes that people usually get wider as they get taller. However, it fails to take into account the thickness of a person. Which quite simply comes down to the assumption of you being two dimensional, which is not the case.

[easy-tweet tweet=”“This should be a final nail in the coffin for BMI” – A. Janet Tomiyama ” via=”no” usehashtags=”no” template=”light”]

These 4 main reasons clearly outline why BMI is fundamentally wrong. And so, as the lead author of a UCLA study, A. Janet Tomiyama said “This should be a final nail in the coffin for BMI”!

What is Shape Index?

In its full name, A Body Shape Index (ABSI), is a new way of calculating your body fat based on your body shape. It has been proven to be a much better indicator of mortality risk by the Journal of Translational Medicine. Shape Index calculates your body fat from your BMI, height and Waist Circumference (WC) as the following.

It’s a new, revolutionary measurement that should replace BMI everywhere in the world. And this is exactly why ShapeScale also uses Shape Index to make predictions based on your body shape.

Why Shape Index Is A Good Indicator

A simple one line answer would be: it doesn’t fail to include crucial factors that BMI’s calculation is lacking.

1. It Takes Fat Distribution Into Consideration

One of the main advantages of Shape Index is addressing the biggest drawback of BMI. While BMI fails to account for how fat is distributed in your body, Shape Index doesn’t. It uses WC in its equation, which is a proxy for abdominal fat distribution. As mentioned earlier, abdominal fat carries several health risks and therefore, is important to consider. 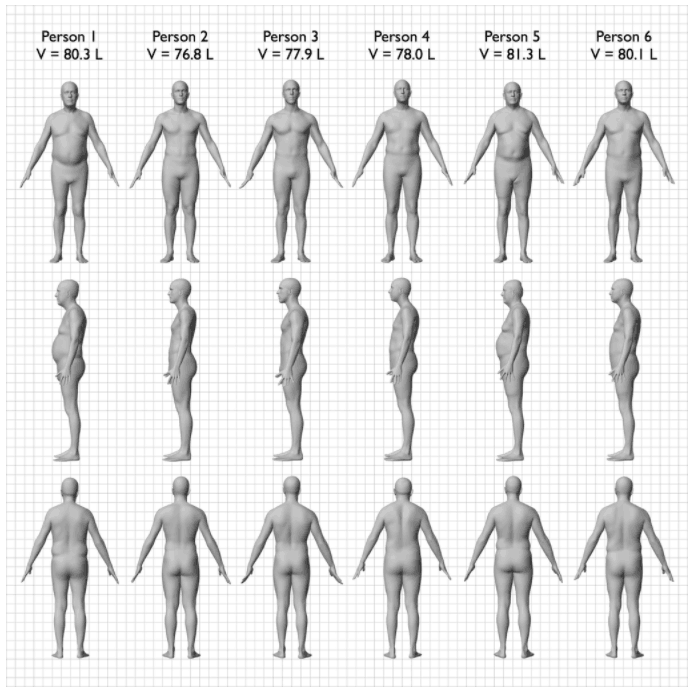 As the Illustration shows, people with the same height, but different fat distribution can have the exact same BMIs. However, their WCs and therefore, Shape Indexes will not be the same.

2. It Overcomes The Shortcomings of WC

Due to the previously mentioned health risks, WC has been found to be a better predictor of mortality than BMI by several studies. However, on its own WC is not a perfect measure either.

The classification of WC is different for men and women, but not for people with different height. Yet, as you get taller, your waist circumference is likely to get greater as well. Additionally, changes in muscle mass can also modify one’s WC. Based on this, a research conducted in 2013 has found that because ABSI uses both WC and BMI, it is likely to be more sensitive to these changes.

Another significant drawback of BMI is the lack of differentiation across genders and age groups. In contrast, Shape Index has a control over age and gender variation. This makes Shape Index a better predictor of body fat and ultimately of the risk of mortality.

Now let’s see a real-life example. We calculated our COO’s, Martin’s BMI and Shape Index and this is what we got. 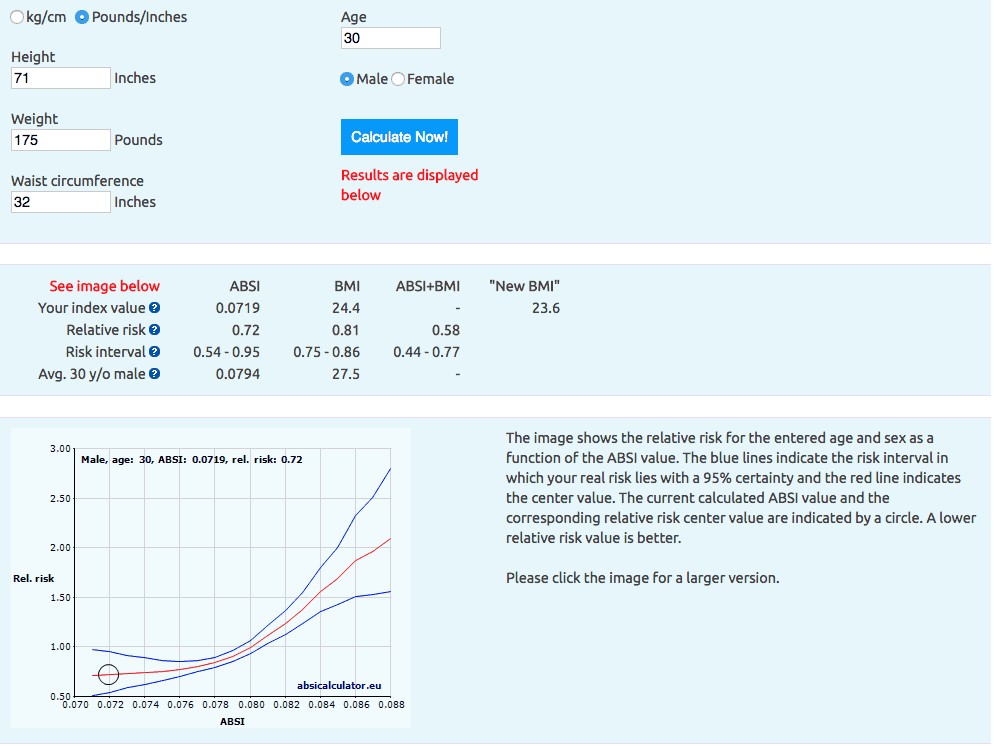 As you can see, according to his BMI, his relative risk is 81%. Whereas, his ABSI suggests it’s only 72%. 10% plus/minus is quite significant I would say.

Compare your BMI and ABSI here👉http://www.absicalculator.eu/!

So to sum up everything, BMI is a misleading indicator of obesity. Several influential factors, such as weight distribution and gender are left out from its calculations, which make the BMI predictions of mortality unreliable. Waist Circumference is already seen to be a better predictor however, it has some drawbacks as well.

Overall, a new measurement, Shape Index is thought to be a much better indicator of obesity and health risks. Therefore, ShapeScale will also use this index to provide feedback on your body shape.